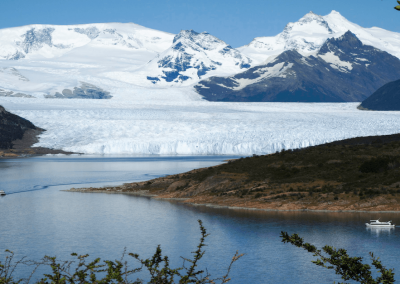 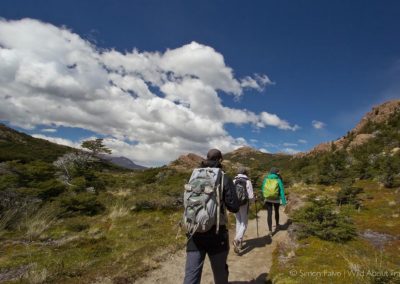 We can include El Calafate into any Patagonian itinerary you have. You can visit pre or post Torres del Paine, Ushuaia and / or El Chalten. The minimum stay in El Calafate is 1 night in-between visiting other places, but often 2 consecutive nights if you include visits to places such as Perito Moreno or if you need a rest stop. On its own El Calafate does not merit many nights, it is purely a stop-off place to get to the other places and from where to see Perito Moreno Glacier.

Approx 3hrs 10min from Buenos Aires and up to 6hrs by road from Torres del Paine.

El Calafate is located in the far south of Argentina beside lake Argentino in the Patagonian region, and from the Chilean side it is just over the mountains on the other side of Torres del Paine National Park. El Calafate is not a picturesque town. It has developed as a tourist destination only because it is the base from which visitors can enter the spectacular ice field Los Glaciares National Park (a UNESCO World Natural Heritage Site), which is 50km away. The park is the second-largest in Argentina covering 600,000ha of which 40% is covered by ice fields, including the famous Perito Moreno glacier. Over 13 glaciers descend into two large lakes: Lake Argentino and lake Viedma linked by the river La Leona that flows from Lake Viedma to lake Argentino. About 80km west of El Calafate is Ventisquero Perito Moreno (Perito Moreno Glacier) – the “big one” that everyone comes to see. It has a 5km long, vertical wall of glacial ice face rising to heights of around 60m flowing some 30km from its source in the Andes Mountains.

The main spectacle occurs when, every few years, there is a mighty breaking off of the glacial ice face into the lake. What happens is that the Perito Moreno glacier advances (one of the few in the world not to be receding) towards lake Argentino until part of it makes contact with the peninsula of land opposite (from where there is a direct viewing area). When the glacier makes contact with the peninsula it then cuts the lake Argentino into two parts creating “two lakes”. As you look directly at the glacier, the “new” lake on the left is now closed in and cannot flow into the larger lake Argentino as it previously did. However, the newly-created lake continues to be fed with the water from rivers and ice melt causing the water level of the lake to rise. Eventually the higher-level new lake manages to erode a hole through the Perito Moreno glacial ice dam until it flows once again into the lake Argentino. As this hole becomes larger, and the water flow gets quicker and more powerful it eventually causes the glacial dam to collapse. It is this massive collapse of towering glacial ice that causes such a stunning spectacle that people flock in from all over Argentina and the World to witness it. The spectacle only happens every few years. However, even without this incredible sight, just being close to the massive glacial wall is an incredible experience in itself.

Arrivals by air from Buenos Aires, Ushuaia and Bariloche in Argentina and by road from Torres del Paine and Puerto Natales in Chile. 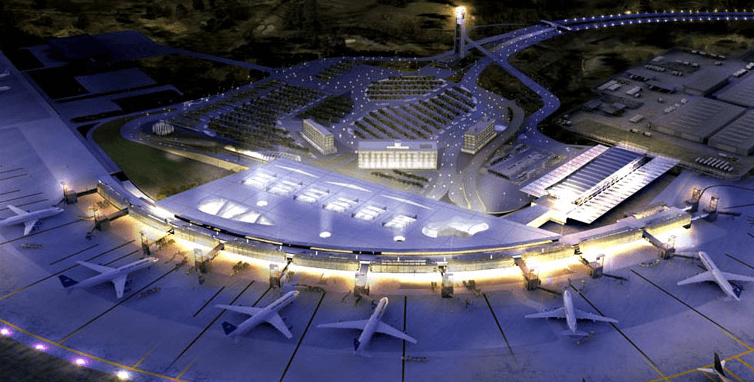 The principal place of interest is the large and impressive Perito Moreno Glacier – well worth a visit. Then the village (3hr transfer) of El Chalten from trekking and Torres del Paine (6hrs) also for trekking and awe-inspiring sigh-seeing.

This being Patagonia you need to pack for all “four seasons in one day”. Suggested clothes are shown here in this graphic.

Our selection of hotels includes many of the most popular accomodations in South America. You’ll find the perfect hotel in your budget.

El Calafate is the gateway to the large Perito Moreno Glacier and trekking at El Chalten. It is also a stop-off on the way to Torres del Paine in Chile and Ushuaia in southern Argentina.

Please fill out form below: